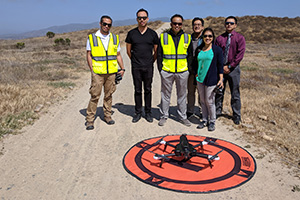 The City of Chula Vista is home to a group of aerospace and communications technology companies researching unmanned aerial systems (UAS), also known as drones. A highly-sought after test site is a large area of vacant, city-owned land in the city's innovation district near Millenia. The 375-acre site will eventually be developed as a four-year university, but with significant development activity not expected to begin for several years, the city has made a portion of the area available for drone researchers. Some portions of the site are within controlled airspace, due to proximity to Brown Field Municipal Airport, while others are outside of controlled airspace. The entire site is currently unimproved vacant land.

The Chula Vista Police Department began a pilot program to explore the potential public safety applications of UAS through its 'Drone as First Responder' Program in 2017. Equipped with a video camera, the small battery-operated device is controlled by a trained "pilot" on the ground using a handheld controller from a safe location. CVPD and the Chula Vista Fire Department (CVFD) are being trained to use these devices in response to critical incidents such as missing persons, crime scenes, traffic collisions, wildfires, or special events. Drones will be deployed in accordance with an established policy and will not be used for random surveillance activities. Like any other public safety tool, the use of drones by government agencies is subject to federal and state laws as well as the agency's policies.

In 2018, the Federal Aviation Administration designated Chula Vista and the broader San Diego region as one of 10 sites for the UAS Integration Pilot Program (IPP), which is designed to accelerate safe UAS integration and help the FAA craft enabling rules that allow complex, low-altitude operations.

One of the five local airspaces designated by the FAA as part of this pilot program is the International Border Airspace, which includes the entire City of Chula Vista as well as a portion of the City of San Diego reaching south to the U.S.-Mexico border. Within this airspace, UAS testing may involve beyond-visual-line-of-sight (BVLOS) operations, night operations, and operations over human beings. Technology to be tested includes detect-and-avoid, identification and tracking, unmanned traffic management, and cybersecurity.

Missions conducted within the local UAS IPP will be focused on five concepts of operations (CONOPS): 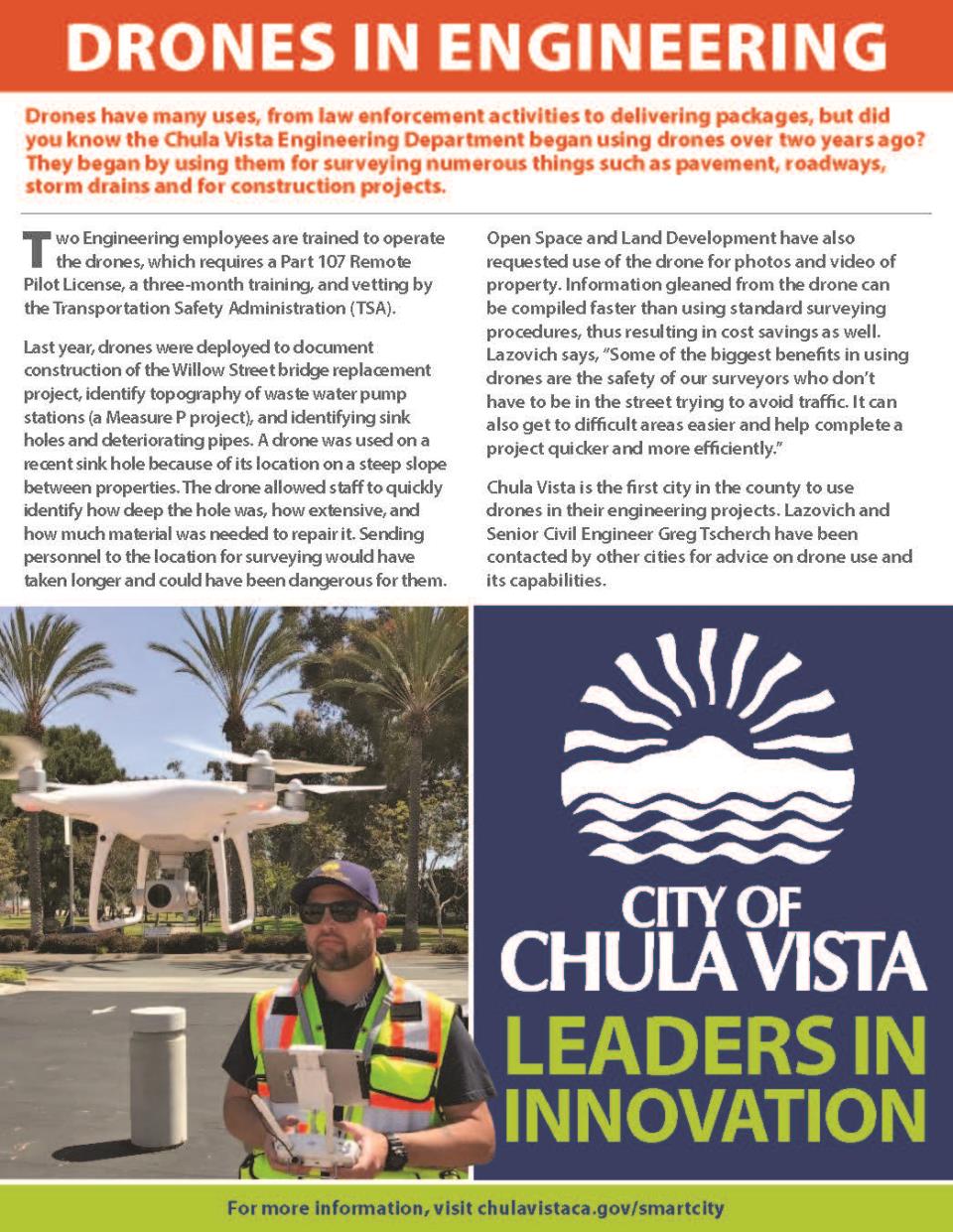 pipes. A drone was used on a recent sink hole because of its location on a steep slope between properties. The drone allowed staff to quickly identify how deep the hole was, how extensive, and how much material was needed to repair it. Sending personnel to the location for surveying would have taken longer and could have been dangerous for them.

Open Space and Land Development divisions have also requested use of the drone for photos and video of property. Information gleaned from the drone can be compiled faster than using standard surveying procedures, thus resulting in cost savings as well. One of the biggest benefits in using drones is the safety of surveyors who don’t have to be in the street trying to avoid traffic. Drones can also get to difficult areas easier and help complete a project quicker and more efficiently.

Start-up costs for the program totaled at $2,500 and included one drone and software. Program funds were allocated from the City’s operations budget. These drones are only used in the public right-of-way.

Chula Vista is the first city in the county to use drones in their engineering projects. Staff have been contacted by other departments and cities for advice on drone use and its capabilities.