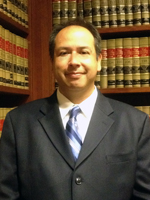 the civil division he served as a Police Legal Advisor. His other legal experience comes from service with the State of California including working as a Deputy Attorney General in Los Angeles and as a Deputy Commissioner with the Board of Parole Hearings. Prior to becoming a lawyer, Mr. Silva was a Reserve Sheriff’s Deputy for Santa Barbara County and was also in the Marine Corps Reserve. It is his belief that providing the best legal advice and services to the City departments and City Council is his primary role. When asked to summarize his mission as a Deputy City Attorney, he says, “Advocating for people and making sure the rule of law is applied conscientiously and fairly.”

Because the office is so small, Mr. Silva, like his colleagues, works on a large variety of tasks. He works on labor negotiations, including drafting memorandums of understanding. He also works closely with the City of Chula Vista’s Human Resources Department in employment matters, including advising on the Americans with Disability Act, the Fair Labor Standards Act, Fair Employment and Housing Act, and other similar laws that directly pertain to the rights of city workers. He further works on matters involving the former Redevelopment Agency. Mr. Silva also staffs various boards and commissions, including the Board of Ethics, Mobile Home Rent Review Commission, and the Civil Service Commission. He also specializes in ethics, including matters involving the Brown Act (California's Open Meeting Laws), the Political Reform Act, and the City’s Code of Ethics.

Along with the City of Chula Vista’s Human Resources Department, Mr. Silva has assisted in the revision of the Civil Service Rules. He is also proud to have been on a team with the City Manager that negotiated pension reforms.