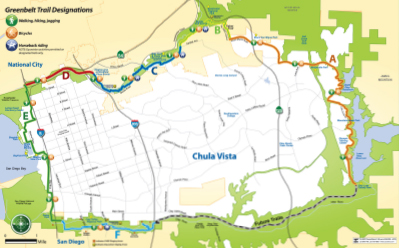 The Greenbelt Master Plan implements an open space and trails concept prioritized through policies in the City’s adopted General Plan. The Greenbelt consists of connected open space ringing the City of Chula Vista that includes the Sweetwater Valley and Otay Valley, connected by the Otay Lakes on the east and the San Diego Bay on the west. A primary trail system within the Greenbelt will consist of multi-use and rural paths that, when connected, will total approximately 28-miles in circumference surrounding the City.

The Greenbelt Master Plan addresses existing and potential trail locations, trail and staging area development standards, maintenance responsibilities and a system of trails and open space that serve as a unifying element in linking other trails within the central areas of the city. Portions of the Greenbelt include open space conservation areas established through the Multiple Species Conservation Program (MSCP) and the San Diego National Wildlife Refuge.

Implementation of the Greenbelt Master Plan will occur over several years and will involve close coordination between resource agencies, local jurisdictions, private development and the public.  The Sweetwater and Otay Valley Regional Parks represent substantial portions of the Greenbelt where coordination between the County of San Diego, City of San Diego and City of Chula Vista is actively occurring.