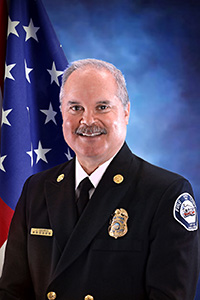 Geering earned a Bachelor of Science Degree in Occupational Studies from California State University, Long Beach, and is a certified Chief Officer designated by the California State Fire Marshal. Geering was a founding member of the Chula Vista Firefighter's Foundation and of the countywide Firefighters Advisory Council to the Burn Institute. He currently serves on the executive board of the San Diego County Fire Chiefs Association.

Geering has been active in the local community including as a board member of the Chula Vista Boys and Girls Club, and as a youth Pony league and Colt league baseball coach. He currently serves on the Board of Advisors for the South Bay Family YMCA. He was born and raised in Chula Vista and a lifelong resident.