In 2016, those running for councilmember in Districts 3 and 4 were residents in their respective districts and were elected by voters living in the respective districts. Councilmember Stephen Padilla was elected to represent District 3 and Councilmember Mike Diaz was elected to represent District 4. Elections for Districts 1 and 2 will be held in 2018. Until those elections take place, the current Councilmembers are designated as the incumbents representing the Council district with the same numerical designation as the Council seat. Councilmember John McCann occupies seat no. 1 and Councilmember Patricia Aguilar occupies seat no. 2. The Mayor and the City Attorney will continue to be elected at-large by all voters in the City.  (Download/print map - PDF) 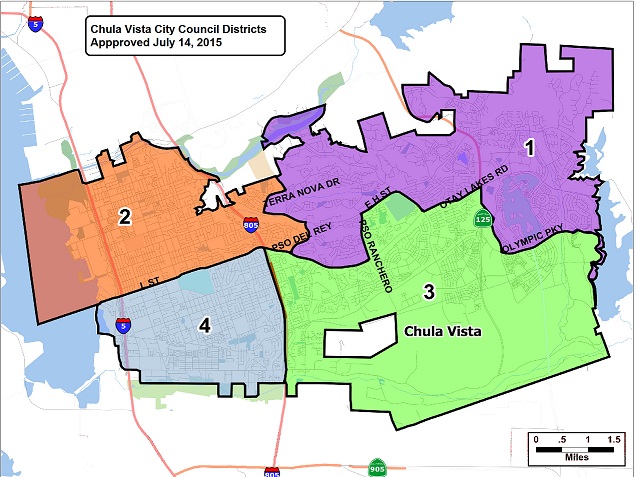 Please see the links below for agendas, archived meeting videos, minutes, and more.

The Districting Commission meetings were held in City Council Chambers and were broadcast live on Cox 24 and AT&T Uverse 99 and live on the web.

The Recommended Districting Plan was approved by the Districting Commission on June 11, 2015.  Plan boundaries were approved on June 8, 2011 after significant public comment, and consideration of the Charter-mandated criteria for creating districts.  These include population equality, geographic compactness and contiguity, following natural and man-made features, street lines and City boundary lines, and respecting communities of interest, to the extent practical. On June 11, 2015, after further public comment, the Commission then proceeded to number the districts. This determined which two of the four district seats that would be up for election in 2016 and 2018, respectively. An  interactive map allows you to zoom into various areas and find streets and other locations within each district.

Download Maps of the Recommended Plan in the following languages (PDF):

A robust public input process was conducted to secure input on the development of the Draft Districting Plan and Recommended Districting Plan. Public outreach reports and public testimony received are included with the agendas.

Have an Event? Submit Your Event Online
No results found.

The Recommended Districting Plan was provided for public review in an interactive format.

The centers will be open during library hours at the following locations:

At the District Accessing Centers visitors were able to:

The Chula Vista Districting Commission was composed of seven members. It was formed to construct four City Council districts to be used in future City elections. The Commission oversaw a process for holding public meetings, proposing districts, conducting public outreach, and finalizing recommendations to submit to the City Council.

Currently, Chula Vista residents vote for each council candidate citywide. After the Districting Plan is fully implemented, those running for Council must reside in the district they wish to represent and residents will vote only for candidates in their respective district. For example, the Councilmember serving District 1 will reside in District 1 and be elected only by voters who reside in District 1. The Mayor will continue to be elected at-large by all voters in the City.

With the assistance of staff and consultants, the Commission implemented a process that secures public input to determine boundaries that will divide the City into four Council districts. The Districting Plan shall comply with the United States Constitution, including containing reasonably equal population; shall comply with the federal Voting Rights Act; shall be geographically contiguous and drawn to encourage geographic compactness; shall be drawn with respect for geographic integrity of any neighborhood and any community of interest, including racial, ethnic, and language minorities; and  shall not be drawn for the purpose of favoring or discriminating against an incumbent, political candidate, or political party.

All commission members live in and be registered to vote in the City of Chula Vista. The seven-member commission is:

Jerome Torres
Mr. Torres is the Chair of the Districting Commission. He is a former member of the Redistricting Commission for the Long Beach Community College District and participated in the redistricting of the Council Districts for the City of Long Beach. He is a Senior Management Analyst and Risk Manager for the City of Coronado and has served as an analyst at the city, county, school district and university level.

Dr. Reynaldo Monzon
Dr. Monzon is the Vice Chair of the Districting Commission. He is an administrator at San Diego State University. He has been involved in various committees, councils and community based organizations in Chula Vista including the Chula Vista Elementary School District and Sweetwater Union High School District.

Rita Buencamino-Andrews
Ms. Buencamino-Andrews is a retired analyst from the City Clerk's office, City of San Diego. She served as a Partnership Specialist for 2010 U.S. Census. She has been recognized for exemplary leadership and service to the Filipino American community.

Cheryl Goddard
Ms. Goddard is a Land Use/Environmental Planner for the County of San Diego and primarily works in the South County. She has a background in Urban Studies and Planning and Ethnic Studies and also serves on the Casillas Elementary School Site Council.

Dr. John Korey
Dr. Korey is a retired professor of Political Science from Cal Poly Pomona. He has published papers on political and voting trends, civic engagement, and California politics. He has been active in local service organizations and was an instructor for citizenship training classes.

William Richter
Mr. Richter is an administrative associate at Sempra U.S. Gas & Power. He has experience in government affairs and communications. He has been involved in community and civic efforts and served on the City of Chula Vista Charter Review Commission.

Get the latest information on districting in English, Spanish, Filipino, Chinese, Vietnamese.