Trust, accountability and transparency are key components in our commitment to serving the community.  The Chula Vista Police Department takes seriously all complaints regarding the service provided by the Department and the conduct of its members and investigates every complaint received.

Our Department policies, along with applicable federal, state and local law, municipal and county rules and any other governing documents, require that we accept, objectively investigate and address all complaints of misconduct.

We recognize the challenge and uncertainty that may accompany making such complaints.  Our policy and practice is to ensure anyone reporting misconduct may do so without fear of reprisal or retaliation.

Citizens may register complaints via our website, in person at the department lobby or via an officer or supervisor in the field, by phone or email, day or night, 7 days a week.

Complaints against personnel are classified into two types of complaints:

Informal - A matter in which the Unit Manager is satisfied that appropriate action has been taken by a supervisor of rank greater than the accused member.

Formal - A matter in which a supervisor determines that further action is warranted. Such complaints may be investigated by a supervisor of rank greater than the accused member or referred to the Professional Standards Unit, depending on the seriousness and complexity of the investigation.

Formal complaints are classified with one of the following dispositions. The dispositions are listed in order of severity against the personnel in questions:

Sustained - When the investigation discloses sufficient evidence to establish that the act occurred and that it constituted misconduct.

Not sustained - When the investigation discloses that there is insufficient evidence to sustain the complaint or fully exonerate the member.

Unfounded - When the investigation discloses that the alleged acts did not occur or did not involve department members. Complaints that are determined to be frivolous will fall within the classification of unfounded.

Exonerated - When the investigation discloses that the alleged act occurred but that the act was justified, lawful and/or proper.

The tables and charts below summarize the outcomes of incidents leading to Formal Complaints by the most severe finding of each incident. Incidents may lead to several complaints. 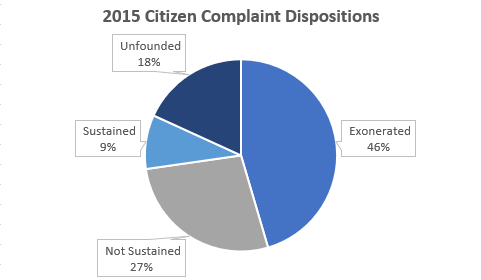 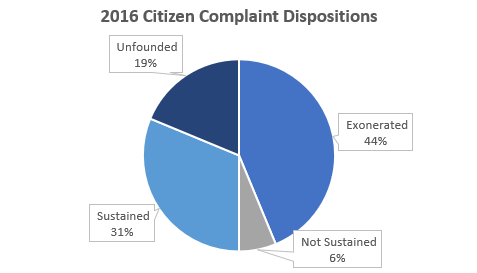 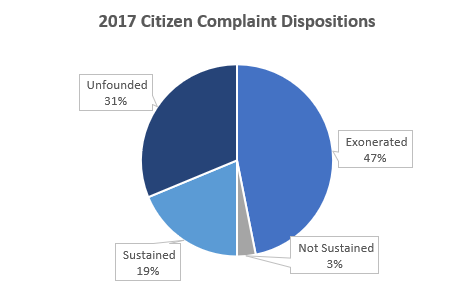 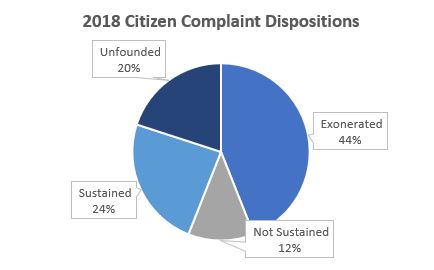 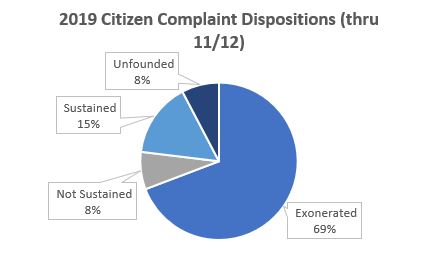 Please note that California law establishes the following:
1) a complaining party receives written notice of the complaint disposition;
2) a police department may disclose statistical data on service complaints if police officers are not identified;
3) names of police officers and complaint investigations are confidential;  limited disclosure is available only if ordered by a judge after a court hearing.
(California Penal Code sections 832.7 and 832.8, California Evidence Code sections 1043 and 1046.)