Domestic Violence (DV) is one of the top crimes in the City of Chula Vista. It is the number two type of police call for service. Each year, there are more than 3,700  DV incidents, with about 1,200 of those incidents resulting in actual crimes.

As the second largest city in San Diego County, the City of Chula Vista services a very diverse population. Patrol officers spend thousands of hours a year responding to DV related incidents. Domestic violence devastates families and greatly affects the community, which is why the City of Chula Vista has invested staff and resources to provide services to DV victims. Victim services alone, however, is not enough. The Chula Vista Police Department (CVPD) is focused on reaching out to victims and offenders to stop the violence and break the cycle of abuse.

Between 2007-2014, reported domestic violence incidents remained steady while overall crime in the City was going down. Based on the data and after conducting a survey of all sworn personnel, it was determined that a domestic violence response protocol should be developed. The revised protocol would focus on addressing key factors:

The DART Project focused on Sector 1 (the test area) and Sector 2 (the comparison area). These sectors were selected because they had similar characteristics. The demographics of residents and population size were similar in both sectors and both reported 400-450 DV crimes per year. When officers responded to DV related calls, they provided suspects and victims with educational handouts including a signed zero tolerance acknowledgement, and conducted follow-up visits.

Data was collected and reviewed by an outside consultant who monitored and compared the data from both sectors to develop metrics and compare progress over five years.

The DART Project produced very positive results as highlighted below:

Crimes and Calls for Service (CFS)

The Chula Vista Police Department was honored as the recipient of the international 2018 Herman Goldstein Award for Excellence in Problem-Oriented Policing. The Goldstein Award recognizes innovative and effective problem-oriented policing (POP) projects that have achieved measurable success in resolving recurring specific crime, disorder or public safety problems faced by police and the community. 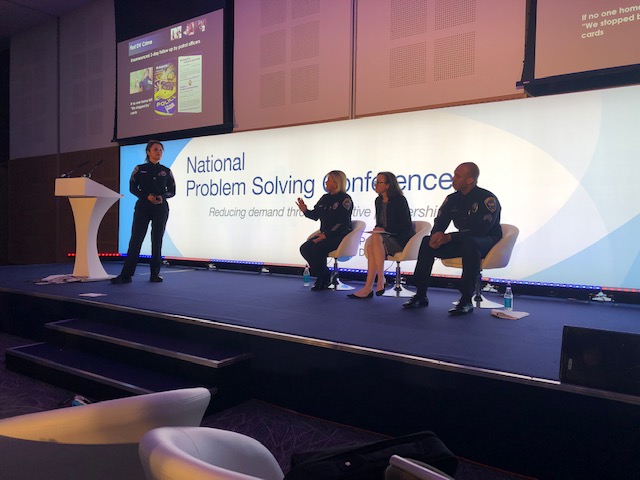 The DART project saved an estimated 200 hours of patrol response time and 120 hours of investigative staff time. In 2018,the project was launched across the City of Chula Vista with an emphasis on engaging with the potential offenders.

When patrol officers receive a DV related call or an officer responds to a DV related incident, officers determine the type of incident - domestic dispute or crime.

All DV suspects will receive a follow-up text message within one week that notifies the subject that the Chula Vista Police Department will be checking up on him/her routinely and as needed.

A detective from the CVPD Family Protection Unit and/or patrol officers conduct weekly, unannounced in-person follow-ups on both subjects and victims. Follow-ups are conducted at the subject’s home or work place and consist of a warning and possible arrest. If no one is home, officers will leave a “We Stopped By” card at the door, letting the involved parties know police officers are actively working to prevent the problems from reoccurring.

The goal of the DVP is to positively impact the following: