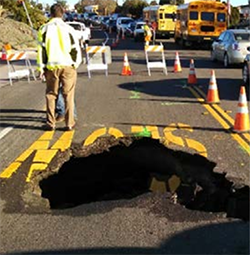 The City of Chula Vista utilizes the Streetsaver Pavement Management System to determine a Pavement Condition Index (PCI) between 0 and 100 to indicate the general condition of the pavement. The pavement condition ratings are:

Currently, there are 169 residential street segments with PCIs of 0 to 25 that can be considered as failed (AKA “red” streets). Since Measure P is focused on addressing failed infrastructure, these failed “red” streets are on the list for replacement/repair/rehabilitation. As Measure P funding becomes available, projects will be implemented focusing on the worst streets first. In addition to the PCI designation, traffic volume, proximity to public facilities (schools, libraries, etc.), and location may necessitate minor deviations in the order in which the segments are delivered. For example, if a project to repair four streets with PCIs of 15 is close to four other streets with PCIs of 22, it would be more efficient to repair/replace all eight of those streets at the same time.

Additionally, there are 305 residential street segments with PCI of 26-50 that are in poor condition and are considered to be approaching failure. While the “red” streets are the top priority for use of Measure P funds, street segments from this list also will be considered for repair.

Hoop stars and tennis buffs will be happy to learn that resurfacing of 38 courts throughout the City of Chula Vista has begun. The resurfacing and re-striping of the basketball and tennis courts is just one project funded by Measure P - the 10-year, half-cent sales tax that will raise $178 million for infrastructure needs.

One of the first basketball courts to be resurfaced was at Harborside Park, 670 Oxford Street. Courts at Veterans Park at 785 East Palomar Street, Los Ninos Park at 150 Teal Street, Connoley Park at 1559 Connoley Avenue and SDG&E West Park at 1450 Hilltop Drive, are also now completed as part of the $200,000 courts project.

In addition to the basketball and tennis courts, City parks are also receiving upgrades. Thanks to City crews and volunteers from the Chula Vista Youth Sports Council, several hundred sprinkler heads and nozzles were recently replaced at Chula Vista Community and Discovery Parks. Materials and equipment have been paid for with Measure P funding. This irrigation upgrade will eventually be implemented at all sports fields in the City.

The new sprinkler heads and nozzles will provide water and energy savings with smart technology that can be operated remotely. Plus they have flow sensors and master valves in the ground that can detect leaks. The technology also shuts itself off if running too long or using too much water. Staff from Hunter Industries, Ewing Irrigation and Graf Irrigation provided installation training to the 150 volunteers on two recent Saturday mornings.

City staff will manage all the equipment using new intelligent irrigation controls. Special thanks to the Youth Sports Council for volunteering during the sports fields and park upgrades. 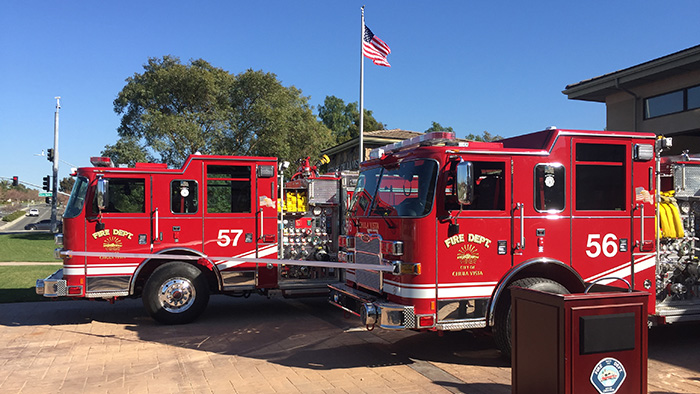 Chula Vista Fire Department (CVFD) Station 7 welcomed two new fire engines last week replacing older units that have been in service for 15 years. Featuring improved handling, stopping and much better emissions, the new engines also have LED lighting for improved visibility. The old engines will be used to improve CVFD's reserve fleet by replacing engines that have been around since 1987. These older engines have firefighters sitting outside exposed to the elements, exhaust gases and in wild-land incidents, fires, smoke and embers.

The replaced vehicles are an example of what Measure P will provide to the City. Measure P is a temporary, ten-year, half-cent sales tax approved by 68 percent of Chula Vista voters in 2016 to fund high priority infrastructure needs. The funds are being used to upgrade police, fire, paramedic and 911 equipment, vehicles and facilities; fund streets and sidewalks; improve parks; repair recreation facilities; replace storm drains to prevent sinkholes; and repair or replace other city infrastructure.

Technology is ever-changing but the Chula Vista Police Department (CVPD) Dispatch was using a 20 year-old Computer Aided Dispatch (CAD) system. Now with monies from Measure P, the ten-year sales tax measure, a new PremierOne CAD system has been installed. "The CAD is a critical component of the 9-1-1 emergency service delivery," said Lieutenant Phil Collum, manager for CVPD's 9-1-1 Communications Center, "With this new system we can better serve our community."

Features of the new $1.4 million CAD system include GPS positioning of patrol personnel ensuring the closest units are dispatched to emergency calls; turn-by-turn navigation showing officers the quickest route to a call;detailed mapping with GPS technologies and real-time remote monitoring; a modern platform capable of interfacing with portable devices such as tablets and smartphones; and improved capabilities on each officer's mobile data computer and soon, on their City smartphones.

While the new system comes with more monitors for Police Dispatchers to view, the system is a much welcomed change. One of the seven monitors at each dispatch station is a GPS map that pops up the location with an icon of a telephone when a 9-1-1 call comes in. Then when officers are driving to the location, an icon of a police car indicates their route. It's similar to a video game but all in real time with real 9-1-1 emergencies. Police Dispatcher Marlene Bragg, a 20-year CVPD employee, said, "This new system is so much better. It allows us to see where our officers are at all times enabling us to reassure the caller that help is on the way."

In addition, this CAD system assigns incident numbers automatically allowing dispatchers and officers easy access to find an incident number when needed for reports and follow-up. 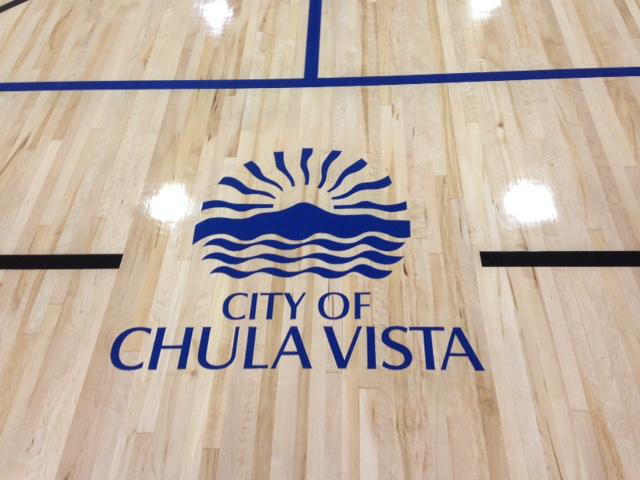 Measure P funds are helping to extend a renovation project at Parkway Gymnasium and Aquatic Center. The City received $775,925 in State Housing and Community Development Housing-Related Parks Program grant funding to refinish the gymnasium floor, refinish the pool, complete ADA retrofits and improvements in the    path of travel, bathrooms, and pool areas, and paint selected areas of the facility.
The $250,000 in Measure P funds will provide for resurfacing the pool deck and pool coping (edging), and painting of the gymnasium foyer interior, pool area building exterior, and, building exterior. The Parkway Gymnasium and Aquatic Center was built in the 1950s. With this renovation project, the facility will offer a beautiful and usable recreational space for the enjoyment of the community for years to come.
View Full Site