The district was formed in 1992 to pay for costs of maintaining landscaping and irrigation improvements within three open space lots adjacent to Bonita Road and E Street totaling 0.5 acres. 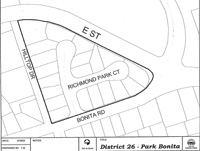 The facilities and items of maintenance included within the District are as follows:

The maintenance consists in general of the following: