No Reservations - Air Jump Permits Only 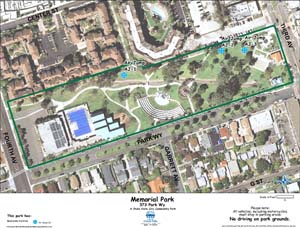 Alcohol is not allowed without a permit at Memorial Park.

Memorial Park is the second oldest park in the City. The land was acquired in 1937, and park amenities include an amphitheater, municipal gymnasium, Restroom, and a swimming pool. Memorial Park is located in the City's "Downtown" area, and is also the site of the City's Memorial Monument dedicated to our armed forces who made the ultimate sacrifice, dating back to World War II.