The history of the area known as Chula Vista, can be traced back millions of years through prehistoric fossils of both land and sea types. Around 3000 B.C., Yuman-speaking people began moving into the area. Many of the Native American Indians in San Diego today are descendants of the Kumeyaay tribe who roamed here for hundreds of years.


The Coming of the Spanish

In 1542, a fleet of three small ships sailed into San Diego Harbor commanded by Juan Rodriquez Cabrillo. These explorations led the Spanish to claim the land. In 1795, Chula Vista became a part of a Spanish land grant known as Rancho del Rey or "The King's Ranch." When Mexico formed its own government in 1831, Rancho del Rey became known as Rancho de la Nacion or National Ranch. The ranch encompassed the area now known as National City, Chula Vista, Bonita, Sunnyside and the Sweetwater Valley. Rancho del la Nacion was used by the Spanish as grazing land for their cattle and horses until 1845 when it was granted to John Forster, the son-in-law of Mexican governor Pio Pico.

The United States claimed California following the Mexican-American war in 1847. Even though California became a state in 1850, land grants were allowed to continue as private property under American law. 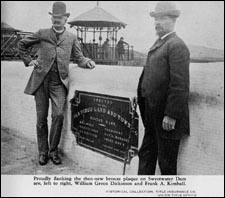 Forster continued to operate the ranch for ten years until he sold it to a French developer. The land was then again sold to the Kimball brothers in 1868 for $30,000. Frank, Warren and Levi Kimball intended to develop the land into productive American-style cities and farms. Frank Kimball is also responsible for bringing the Santa Fe Railroad to San Diego, with its first terminus in National City.

Several directors of the Santa Fe Railroad and Colonel W.G. Dickerson, a professional town planner, formed the San Diego Land and Town Company. The company set out to develop lands of the National Ranch for new settlers. They issued promotional material to attract settlers that read: "Upon the best part of this tract, 5,000 acres are being subdivided into five acre lots with avenues and streets 80 feet in width running each way, the steam motor road passing though the center. This tract, known as Chula Vista, lies but a mile from the thriving place of National City." With this announcement, the boom of the 1880s was on.

These five-acre lots sold for $300 per acre in 1887. The purchaser was required to build a home within six months on the parcel. By 1889, ten houses were under construction and land sales were excellent. And thus, the City of Chula Vista was created.

A resident, James D. Schulyer, suggested the name Chula Vista for the town and the San Diego Land and Town Company adopted it. Chula Vista can be roughly translated in Spanish as "beautiful view." 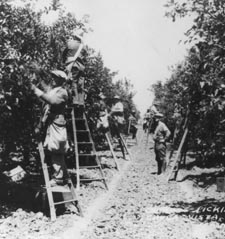 In 1888, the Sweetwater Dam was completed to bring water to Chula  The Orchard Period Vista residents and their farming lands. Frank Kimball became the State Commissioner of Agriculture and discovered citrus trees to be the most successful crop for the area. Chula Vista eventually became the largest lemon-growing center in the world for a period of time.

A railroad was built to connect San Diego, National City, Chula Vista and Otay. This railroad, know as the National City and Otay Railroad, flourished for many years.

On October 17, 1911, an election was held in Chula Vista to incorporate and the people voted in its favor. The State of California approved this Act of Incorporation in November. The Board of Trustees of Chula Vista held an election at the office of the People's State Bank and E.T. Smith was elected President.

Local farmers continued to grow lemons as their primary crop and used over eight packing houses in the city. However, terrible weather came to the area in the following years causing severe damage. Crops suffered from a severe freeze in 1913 and droughts in 1914 and 1915. The Floods of 1916 caused major damage with a break in the Lower Otay Dam causing millions of gallons of water to empty out in two and a half hours. Railroad tracks near Second Avenue were swept away, 23 homes were destroyed and more than 20 people were killed.


World War I and the Great Depression

In February 1916, the Hercules Powder Company began the design and construction of a kelp processing plant covering a 30-acre plot of land in Chula Vista. Kelp was an ideal source of materials used in the production of explosives. The plant produced potash and acetone to make cordite, a smokeless powder used extensively by the British armed forces in World War 1. Hercules produced 20,838,000 kilos of cordite for the British government during the war, making it the largest kelp harvesting fleet in the world at the time. The plant was located on what is now known as Gunpowder Point currently the home of the Chula Vista Nature Center.

Although the Great Depression affected Chula Vista significantly, agriculture still provided considerable income for the residents. In 1931, the lemon orchards produced $1 million dollars in revenue and the celery fields contributed $600,000. 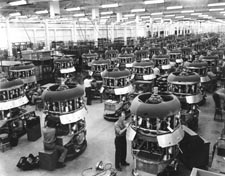 World War II ushered in changes that would affect the City of Chula Vista forever. The principal reason was the relocation of Rohr Aircraft Corporation to Chula Vista in early 1941, just months before the attack on Pearl Harbor. Rohr employed 9,000 workers in the area at the height of its wartime production. With the demand for housing, the land never returned to being orchard groves again. The population of Chula Vista tripled from 5,000 residents in 1940 to more than 16,000 in 1950.

After the war, many of the factory workers and thousands of servicemen stayed in the area resulting in the huge growth in population. During those years, numerous schools, homes, banks, restaurants, gas stations and shopping centers opened to accommodate the growing number of residents. The last of the citrus groves and produce fields disappeared as Chula Vista became one of the largest communities in San Diego.