The City of Chula Vista is not only rich in culture and community, but also strong in tradition and remembrance of those who fought bravely for our freedom.  According to the 2011 United States Census, over 18,000 post-service veterans make their home in Chula Vista.  One of the only incorporated cities in San Diego County with a Veterans Advisory Commission to support awareness and issues regarding military veterans, a veteran presence can be found throughout the city.  We pay tribute to our veterans past, present and future through our actions in salute of service to our country. « Veterans Park
785 E. Palomar Street (Map)
This park includes a prominent "Walk of Honor" walkway paved with bricks inscribed with the names of veterans and a recreation center that supports many civic activities. 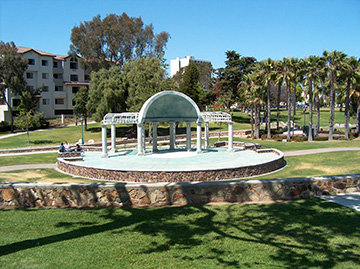 373 Park Way (Map)
The second oldest park in Chula Vista, Memorial Park dates back to 1937 and is the site of the City's Memorial Monument dedicated to our armed forces that made the ultimate sacrifice, dating back to World War II.  The memorial to honor fallen Chula Vista veterans who died while serving our nation is a project initiated by the Chula Vista Veterans Advisory Commission. These veterans are named in the park and the Commission is collecting biographies.

Dedicated Streets
There are over 92 streets in the Sunbow, McMillin and Otay Ranch communities that are presently named to honor Chula Vista’s veterans. In addition to their name on the street, each sign is in red, white and blue with a flag and notation of each individual.

Virtual Memorial
Veterans Memorial Hall
A virtual memorial has been established to remember our fallen veterans.  Each veteran is recognized by name and is accompanied with a biography.  The Veterans Advisory Commission is most grateful to the students of EastLake who assisted in collecting and assembling biographies.  Their hard work has enabled this memorial to live as a virtual remembrance.

If you are a veteran, thank you for your service!